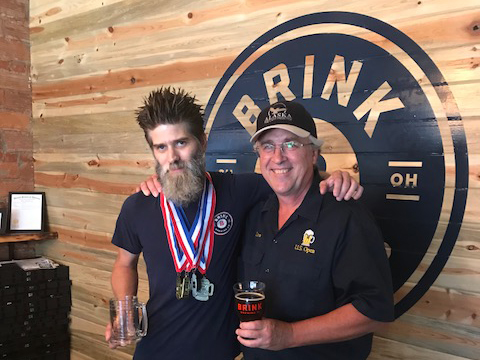 Professional breweries and award-winning home-brewers from all over the world sent in 6,300 beers representing more than 110 different styles for the 2018 U.S. Open Beer Championship. Brink Brewing placed first in the English Mild Ale, Brown Ale, and Strong Scottish Ale categories for Hold the Reins, Father G’s Bees, and Duncan Clan, respectively. Additionally, the brewery placed second for their Moozie in the Cream Stout Category.

Hold the Reins is an English Mild, a classic “Session Ale” while still full flavored. Moderate sweetness, a bit nutty with a touch of caramel. Chocolate and roast notes give way to a dry finish. Hold the Reins also recently won Gold at the 2017 Great American Beer Festival®.

Named after the brewery’s College Hill neighbor, Father George, of Saint Clare Parish who also happens to be a beekeeper; Father G’s Bees features 40 pounds of honey from his harvest. The combination of Maris Otter, chocolate, and caramel malts provide a richness while the honey gives a touch of boozy sweetness to this delectable Brown Ale.

Duncan Clan is a Scottish Ale featuring rich, malty flavors of caramel and toffee balanced by roastiness and a subtle rye spiciness. This true-to-style brew is all about featuring the malt, leaving a very subtle hop presence.

Moozie is a rich Milk Stout. Like a chocolate milkshake without the straw, it features chocolate and coffee notes and is almost chewy thanks to the addition of lactose and flaked oats. This beer also boasts a bronze medal from the 2018 World Beer Cup®, a bronze from the 2017 Denver International Beer Competition and a silver medal from the 2017 U.S. Open Beer Championship after only being open for four months (one of the youngest breweries to place that year).

“Any win at this competition is a great achievement for our team, let alone four medals,” says Co-Founder Founder John McGarry. “We take great pride in our ability to brew high-quality beers across a variety of styles and these U.S. Open medals really validates that. Our Co-Founder and Head Brewer Kelly and his team have shown that dedication to their craft can have results, even though we’ve only been a business for a short time.”

If you have questions about Brink Brewing’s recent U.S. Open Beer Championship win or any other media inquiries, contact Emily Hutto at This email address is being protected from spambots. You need JavaScript enabled to view it..

ABOUT BRINK BREWING Brink Brewing Co is neighborhood Craft Brewery in the College Hill neighborhood of Cincinnati. Providing quality beers in a welcoming, comfortable taproom. In their one year of operation, they have accumulated an impressive amount of awards including a Gold at the 2017 Great American Beer Festival®, a Bronze at the 2018 World Beer Cup®, seven U.S. Open Beer Competition medals, and two Denver International Beer Competition awards. For more information visit brinkbrewing.com.

Company: RadCraft
Contact: Emily Hutto
Email: This email address is being protected from spambots. You need JavaScript enabled to view it.