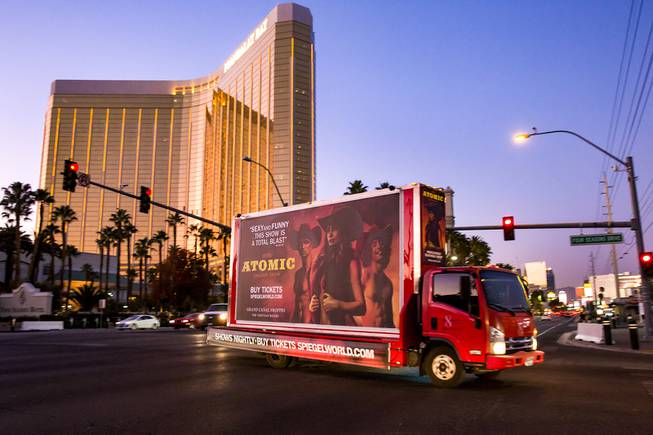 A mobile billboard promoting the Atomic Saloon Show is seen on the Strip, Thursday, Nov. 7, 2019

Mobile rolling billboards displaying messages from politicians or advertisements for “HOT BABES” are so ubiquitous in Las Vegas, it’s hard to imagine the Strip without them.

Take a drive on Las Vegas Boulevard, especially on a weekend, and you’re likely to spot a billboard promoting one of the city’s many entertainment options. But take a deeper look and you may notice the latest mobile advertisements have a different look and feel.

Safety concerns involving erratic truck drivers making illegal U-turns while carrying the mobile advertisements—and high winds causing some to tip over—prompted officials to pass its first-ever ordinance to regulate the industry last year. The ordinance prohibits trailer-drawn billboards and limits the overall size of vehicles to 32 feet long by 8.5 feet wide. The trucks are also prohibited from operating during winds above 35 mph and from making U-turns.

Some mobile business owners have applauded the ordinance, saying the industry has been a “Wild West” for out-of-town advertisers coming in for the weekend and clogging up the roads. “I’ve seen a lot of crazy stuff here that needed to be cleaned up,” says Michael Foland, owner of Vegas-based mobile billboard company Flo Advertising. “Some of the vehicles here look like they’ve been around since the ’70s, and a lot of the drivers here aren’t licensed in Nevada.”

Still, the ordinance has some flaws, says Virginia Valentine, president of the Nevada Resort Association. It doesn’t define the hours of operation, particularly during peak traffic times. And Valentine says the traffic congestion has a direct economic impact on the resort community. “There is lost time from resort employees and employees of resort vendors who are stuck in idling traffic,” she wrote in a letter to commissioners.

Valentine also takes issue with the vehicles’ slow rates of speed—another culprit for traffic congestion—and asks the county to add a line to the ordinance prohibiting vehicles from traveling at less than 5 mph. Enforcement is another issue for Valentine, who says the ordinance would be strengthened if it identified an authoritative agency.

“We recognize mobile billboards serve a valuable purpose for area businesses, including those in the primary gaming corridor,” she wrote in her letter. “However, like stationary billboards, they are most effective when strategically utilized and limited in number.”

Commissioners voted to stop issuing licenses for mobile billboards until a traffic study assessing the situation can be completed. The county might opt to limit the number of trucks on the road at a given time. To date, it has approved 85 licenses from 12 companies, according to spokesman Dan Kulin, and although the county hasn’t denied any applications, it isn’t accepting any more at present.

“The impact of mobile billboard traffic is something we need to measure,” said Clark County Commissioner Jim Gibson, whose district covers the Strip. “If we’re going to regulate it, we need to understand it better. … The lifeblood of the community is at stake here.”

Jeremie Watkins, managing partner at Kre8 Media Outdoor Advertising, which owns 50 of the licensed trucks, says he was in favor of the new laws before they were passed. But he worries that a limit on the number of vehicles that can be out at a time could stifle opportunities for growth.

“I know the ordinance was based around safety, and I think we want to see what the next steps are,” he said. “As a community partner, we also want the Vegas experience to be important. We don’t want to get in the way of that. We want to find a place where we can play our part and do what’s right.”

This isn’t the first time local government has tried to curb mobile billboard presence. In 2009, then-Clark County Commissioner Chris Giunchigliani argued for an outright ban. She sought the help of former Assemblyman Kelvin Atkinson, a Democrat representing Las Vegas and a Clark County employee, to draft a bill to ban mobile billboards from operating on the road. The bill was never drafted, however, and faced potential First Amendment pitfalls, because local governments can’t regulate the type of content displayed on the signs.

Gibson, then-mayor of Henderson, said the Henderson City Council faced a similar issue, and was advised by its attorneys that it could not completely mute free expression.

“Neighbors in the past [have] complain[ed] about the content on them,” Gibson said. “We shut that out of our minds. Now we’re focusing on how best to make them safe. We don’t need to take away their business or shut them down.”