All is Not Lost:  Bidding Begins on Unprecedented Brora Auction – Scotch Whisky News 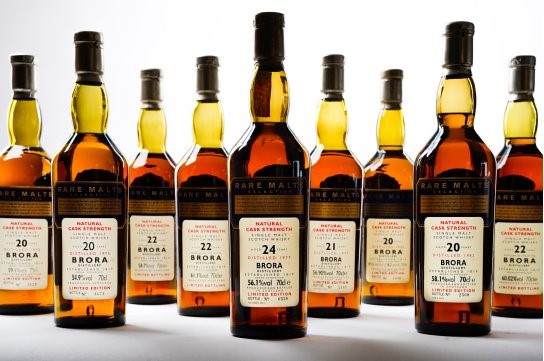 All is Not Lost:  Bidding Begins on Unprecedented Brora Auction

Dormant for decades and sometimes a generation, whisky from ‘lost distilleries’ often has mythical status. This is undoubtedly true for legendary Sutherland distillery Brora (closed in 1983), whose whisky has become increasingly sought-after in recent years. There may be more ubiquitous names in the world of whisky, but to whisky connoisseurs, collectors and investors there is none more revered for its quality of liquid, extreme rarity and unique history than Brora.

The world’s leading whisky auction house, Whisky Auctioneer, is to host the first ever dedicated Brora whisky auction taking place from the 15th – 19th of April on www.whiskyauctioneer.com, showcasing over 50 Brora bottles, as part of the largest collection of Brora ever to be held in one auction.

The auction will include extremely scarce expressions from the Old Clynelish distillery (now known as Brora) distilled prior to its brief closure in the late sixties. Today, these rarities are celebrated for their highly idiosyncratic style and elusive waxy character that cannot be replicated in modern whiskies.

The sale will also feature various expressions from the historic 1972 Brora vintage, a chapter of whisky history all on its own. These include the 1972 Cask Strength 40 Year Old decanter, the oldest Brora ever released at the time and a sibling to some of the most legendary expressions ever produced at the distillery.

“Few distilleries manifest more allure than Brora, and certainly none so effortlessly. It’s therefore striking to see an auction dedicated to so many rare Brora bottles. Whether you are a whisky collector or lost distillery enthusiast, this is a one of a kind opportunity to get your hands on these special Brora bottles, many of which are rarely seen on the secondary market.

“The Brora auction encapsulates the distillery’s past as it prepares to turn on the stills to its future with the chance to bid on complete collections and rare Single Malts created prior to the distillery’s halt in production in 1983 –  a timely reminder to revisit these legendary malts and that ‘lost distilleries’ are not always lost forever.”

Emmanuel Dron, founder and co-owner of the Auld Alliance and Author of ‘Collecting Scotch Whisky’:

“Brora is a legendary malt, often talked about in whisky circles. Such a revered spirit and so hard to find, devotees from across the world have made visits especially to the Auld Alliance in Singapore simply to have the chance to try the exceptional spirit distilled at Brora.

“This auction allows whisky lovers and lost distillery enthusiasts to get a hold of some of these rare bottles, including even Scotch Malt Whisky Society’s 61.1, the first ever bottling of Brora single malt. With the Brora auction following the announcement that the distillery is to be re-awakened, it provides an opportunity to honour its venerated past, while building excitement towards its future.“

Located in Sutherland, Brora distillery shares an intertwined history with Clynelish – a victim of its own success, the owners of the Clynelish distillery decided to build a secondary distillery next door due to its growing reputation. This modern distillery was to take the name Clynelish forward, and following a brief period where the distilleries were simply referred to as ‘Clynelish A’ and ‘Clynelish B’, the original distillery was renamed Brora in 1969.

Over the next few years, Brora produced a heavily-peated single malt, comparable to the whiskies of Islay. This mini era of production has become a storied part of the distillery’s history, before they started reducing peat once again in 1973.

The auction comes in time with the gentle reawakening of Brora, as the distillery and its operations aim to reopen in 2021 offering a new era of Brora. Brora distillery was one of eleven distilleries that closed in the Spring of 1983 following the ‘whisky loch’ crisis. Despite closing, the distillery’s legend continued to live on, gaining a cult following of whisky lovers over the decades for its unique profile and strong character malts.

Other highlights in the exclusive auction have only appeared for sale on very rare occasions, if ever. A star lot is Bottle #1 of a 1978 Brora bottled at 41 years of age under Diageo’s Casks of Distinction programme. One of only 60 bottles in the world, this is the first time it will have ever appeared for sale.

To register to take part in the Exclusive Brora auction, visit www.whiskyauctioneer.com

Whisky Auctioneer endeavours to make the market more accessible for buyers and sellers of any background and geography. Its monthly global auctions feature the most comprehensive selection of old, rare and collectible whiskies and spirits available online. Whisky Auctioneer is passionate about connecting these bottles with those who share in their passion and actively support their customers in their aims, whether that be consuming, collecting or investing.

In February 2021, the Perth-based online auction house made history during the iconic sale of The Perfect Collection when a bottle of The Macallan 1926 Fine and Rare 60 Year Old sold for a hammer price of £1m, the first time a single bottle of whisky has sold at an online only auction for one million pounds.

Whisky Auctioneer became the first online auction house to sell a million-pound bottle and outperformed the nearest traditional auction house by 200% in value from spirits sales in 2020, showcasing the move that whisky collectors, investors and drinkers have already made online and firmly establishing their leading position within the modern secondary whisky market.

The business currently sees over 100,000 bids per month and has conducted deliveries to 74 countries across the globe. It also opened its first European base in Germany last year.

The business’ Founder, Iain McClune, was listed as ‘One to Watch’ in The Telegraph’s Most Ambitious Business Leaders 2020 programme.