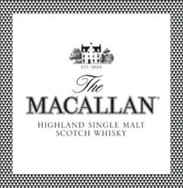 The Macallan supports vital conversation work in the River Spey 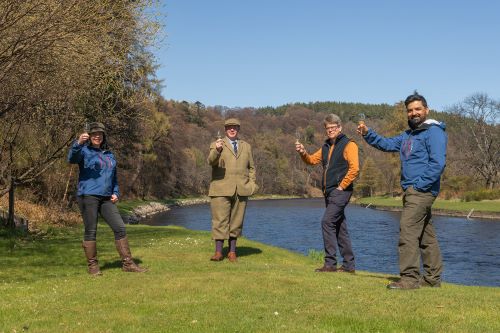 A project to preserve at-risk Atlantic salmon in the River Spey is underway as The Atlantic Salmon Trust embarks on the Moray Firth Tracking project, supported by a charitable partnership with The Macallan.

The River Spey is home to the largest Atlantic salmon population in Scotland, a key-stone species which is in sharp decline due to habitat destruction and overfishing. Winding through the North East of Scotland, nearly two miles of the river flow through The Macallan Estate, the birthplace of every bottle of The Macallan’s exceptional single-malt whisky since 1824.

As a guardian of The River Spey, one of the last sanctuaries for Atlantic salmon, The Macallan is supporting The Atlantic Salmon Trust in its vital conservation work spanning a number of research activities, as well as supporting the innovative Moray Firth Tracking project.

Now entering its second phase, the project which launched in 2019, will examine why Atlantic salmon are dying in their oceanic migration. Beginning in Ballindalloch just outside The Macallan Estate, the initiative will see more than 800 fish fitted with acoustic tags which emit a ‘ping’ containing a unique ID code. This noise is detected by hydrophone receivers which are placed at regular intervals to track smolts – salmon which are ready to go out to sea – throughout their journey.

Over the next two years The Atlantic Salmon Trust will analyse the information to gather evidence for local river managers and policy makers to help them better protect their wild fish stocks.

In the 1980s, between eight to ten million salmon lived and thrived in Atlantic, but today that number is expected to be between two and three million. If the trend continues, it is feared that Atlantic Salmon could become an endangered species in 10 years’ time, and possibly lost altogether by 2050.  As a key-stone species, Atlantic salmon have an important impact on the ecosystems they inhabit, without which, the ecosystem would be dramatically different or cease to exist. 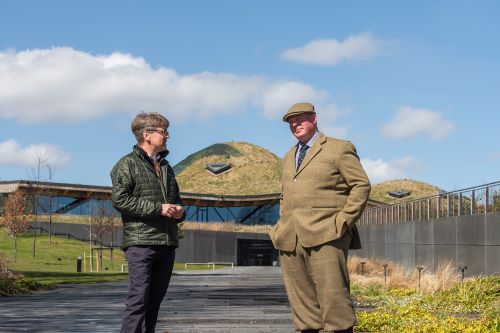 Robert Mitchell, Ghillie at The Macallan Estate, said: “As proud custodians of The River Spey, everyone who works at The Macallan Estate is passionate about preserving the wildlife which lives here. There are many projects underway to protect the biodiversity and habitats in our grounds, from removing old building structures to reshaping the riverbank and improving the temperature of the water.

“The River Spey has been a source of inspiration for The Macallan since our early days of whisky making nearly 200 years ago, and protecting this sanctuary is very important to us. The conservation work being undertaken by the Atlantic Salmon Trust is vital in protecting the species, and our partnership is based on a shared spirit of sustainability and community as together we care for the extraordinary river and its natural surroundings.”

Mark Bilsby, CEO of the Atlantic Salmon Trust, said: “Our partnership with The Macallan provides us with a strong base to build upon the work we have been carrying out for almost 50 years. Out of every 100 salmon that leave our rivers for the sea, less than five return, representing a loss of nearly 70% of the population in just 25 years – it is more important than ever that we understand the reasons behind this, and The Macallan’s support provides a strong platform, ensuring that we can continue to work on key research projects during challenging times.

“In addition to the Moray Firth Tracking project, funding from The Macallan will also go towards the development of other initiatives and bringing people within the salmon research community together.”

The Macallan was recently awarded the Positive Luxury Butterfly Mark for its commitment to protecting the biodiversity and habitats in its Easter Elchies Estate, marine conservation, and a number of other sustainable initiatives, including the design of its new distillery home, which draws over 80% of its energy from renewable sources and boasts one of Europe’s largest green roofs.

Founded in 1824, The Macallan is renowned worldwide for its extraordinary single malt whiskies. Their outstanding quality and distinctive character reveal the uncompromised excellence pursued by The Macallan since it was established by Alexander Reid, on a plateau above the River Spey in north-east Scotland.

In 2018, The Macallan opened a new chapter in its history with the launch of its award-winning Speyside distillery. Designed by internationally acclaimed architects to promote sustainability, the building takes inspiration from the surrounding ancient Scottish hills. It stands nearby Easter Elchies House, the Highland Manor built in 1700 which is The Macallan’s spiritual home and remains the heartbeat of The Macallan’s beautiful 485-acre Estate.

The Atlantic Salmon Trust exists solely for the protection of wild salmon and sea trout. It is our aim to create a positive future for these at-risk species; using scientific research to understand their decline and using the generous donations from our supporters to put evidence-based solutions into practice.

Wild Atlantic salmon are an iconic species with a remarkable history. They are uniquely placed to inform us of the quality of our waters and form an incredibly important part of the ecosystem of our rivers. We cannot afford to lose them—and that’s why everything we do at the Trust is designed to put #WildSalmonFirst.

About the Moray Firth Tracking Project

Somewhere along their journey, wild salmon are disappearing. Out of every 100 salmon that leave our rivers for the sea, less than 5 return—a loss of nearly 70% of the population in 25 years. If this decline continues, the iconic wild Atlantic salmon could become an endangered species in 10 years’ time, disappearing from our waters altogether in just 20 or 30 years.

The Moray Firth Tracking Project is designed to find out what is happening to our salmon on this journey, so we can take steps to inform river managers and policy-makers on how best to implement practical management solutions to protect wild Atlantic salmon, and sea trout, in all areas.

When launched, the Moray Firth Tracking Project was the largest, most ambitious acoustic tracking project to be undertaken in Europe. Work began in 2019, with activity delayed in 2020 due to the Covid-19 pandemic.