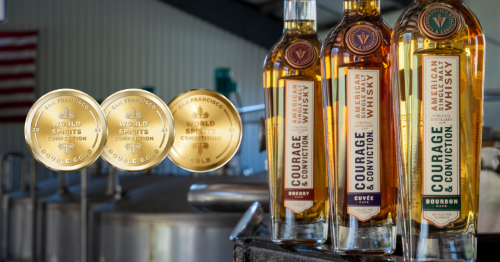 Lovingston, Va. (May 5, 2021) – Three new Virginia Distillery Company whiskies recently took home awards at the San Francisco World Spirits Competition, an awards program that has become one of the most respected and influential spirits competitions in the world since its start in 2000.

“We’re thrilled that these new additions to our product lineup are already being recognized with awards from the San Francisco World Spirits Competition,” Virginia Distillery Company CEO Gareth H. Moore said. “I’m very proud of our team, the work that went into making this happen and for the guidance of our mentors who have helped to shape our whisky.”

The 2021 San Francisco World Spirits Competition had more than 3,500 entries. All entries were tasted blind by a panel of judges made up of spirits industry experts throughout a four-day judging process.

Staffed by a local Virginia team mentored by Scottish consultants with decades of experience, Virginia Distillery Company is the largest dedicated American Single Malt whisky distillery in the U.S. The distillery has a current annual production volume of 80,000 4.5L cases and growing. At full capacity, the distillery can produce over 8,000 casks yielding 350,000 4.5L cases annually. The distillery produces Courage & Conviction American Single Malt on-site using malted barley from North America and water from Virginia’s Blue Ridge Mountains. In addition, the distillery offers the award-winning VHW series, made with 100% malted barley. Showcasing both Old and New World whisky-making, the award-winning line marries whisky made on-site in Virginia with whisky from Scotland.