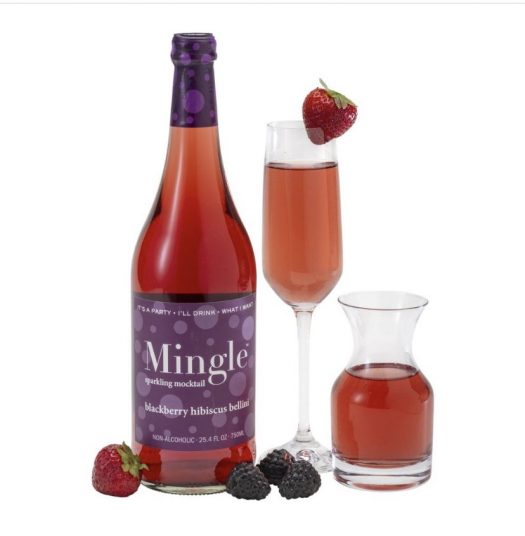 The inherent challenge for any non-alcoholic beverage producer trying to win over a part of the booming spirit-free market is setting the right expectations; are you offering a non-alcoholic replacement for a specific cocktail or spirit, or offering any alternative to the standard seltzer/lime option. The former is a bit of a Quixotic pursuit (so far). The latter provides a more forgiving and flexible bar (no pun intended). But there will be expectations nonetheless.

Which brings us to the review of Mingle Mocktails and the question of “Why would someone choose Mingle Sparkling Mocktails over sparkling water or seltzer?” In their own words:

Have you ever spent an evening at an event drinking sparkling water in a clunky glass with a big red straw? I have, and it wasn’t fun, especially when people kept asking why I wasn’t drinking! Sparkling water is hydrating but it is tasteless, does not look festive or special, and it really gets boring over the course of an event when other individuals are drinking cocktails and wine. Mingle is for those who want to hold an elegant cocktail glass that not only looks nice, but also tastes delightful and refreshing.

I tried the company’s Blackberry Hibiscus Bellini and it certainly does look pretty and festive in a flute with which to mingle about at a party. It has a pleasant enough berry botanical flavor. But other than that, I was never sure what I was drinking and why, since this is not reminiscent of a bellini nor was it very sparkling. Drinking it neat and chilled as a standalone cocktail feels neither here nor there — low fizz and neither sweet nor fruity enough to mimic fruit-forward cocktails, while being too sweet to pass as drier spirit-forward ones. It does better as a mixer base where you load up on the flavors and texture you’re really chasing after, such as a lime, seltzer, fruit, more syrup (really, a little bit of anything would help.) And yes, adding champagne does make for a nicer approximation of a bellini.

This isn’t a remarkable drink, but it’s not terrible either,  though I would consider picking up a bottle to include in an array of spirit-free options for my sober-curious guests. It may not have universal appeal, but this may just hit the spot for some folks. For instance, my daughter and I poured some of the cocktail into proper stemware to toast her 11th birthday — and she thought it was delightful.