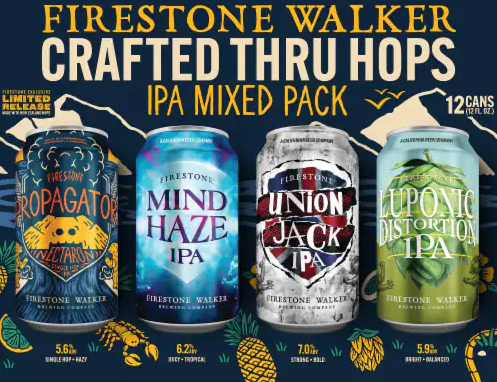 “Fruitless” would not be an adjective best describing Firestone Walker. A count has yet to be tallied, but if I were to place a wager, Firestone would be one of the most frequently covered beer brands on this site. Last month, Drew reviewed the Firestone Walker XXIV Anniversary Ale, and in March Chris reviewed the 805 Cerveza — plus four other brews. April Ales bring May IPAs, specifically four of them in a variety 12 pack. (We’ll skip Mind Haze, which Chris already covered separately.) Let’s skip the awful dad jokes and get hoppin’.

Firestone Walker Luponic Distortion IPA Series No. 18 – Brewed with all New Zealand hops, there’s a consistent theme of white grape running from nose to finish. Pine and tropical fruit notes take center stage on the nose, and the malt/hops influence drives things on the palate. It’s another pleasant installment in a series with remarkable consistency. 5.9% abv. A-

Firestone Walker Union Jack IPA – Lots of tropical fruit on the nose here, with a bit of spice and honey, but nothing attempting to dominate. The palate is quite malt-heavy with a wave of pine resin and bitter hops towards the end. It’s a well balanced west coast IPA that never lets its guard down. And the kick up in abv is a most welcome one. 7.0% abv. A-

Firestone Walker Propagator Nectaron IPA – The newest hazy IPA utilizes nectaron hops from New Zealand and the best of this fab four. Lods of guava and pineapple on the nose, giving way to citrus fruit and strawberries on the palate. The balance between the fruit and hops is nothing short of disciplined and sensational, the finish clean and full of citrus. Regrettably, this is a limited edition, so pick it up while it’s still on the shelves. 5.6% abv. A