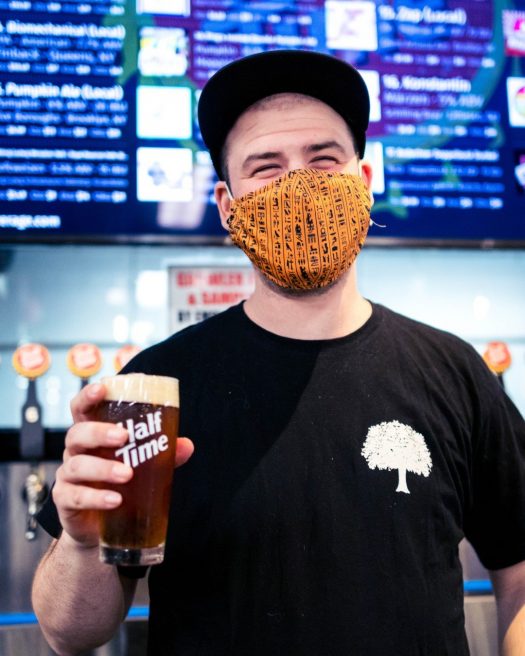 Half Time Beverage is the self-proclaimed largest online retailer of craft beer. It’s not just the operator of two stores in New York’s Hudson Valley — featuring more than 4000 beer and cider selections — it’s also an online merchant, happily shipping brews directly to the doors of the very thirsty.

Sadly, Half Time Beverage is about 3000 miles away from Drinkhacker HQ, so we had them ship a half-dozen selections our way to sample some of the rarities and oddities that are available in its aisles. (What we got were all monster milk stouts, pastry stouts, or similar.) If any of these brews sound good to you, the link to buy any of them can be found at the bottom of the review. (All were poured from 16 oz. cans.) For pricing… check with Half Time.

Gun Hill Brewing PB & Void – From Bronx, NY, this is Gun Hill’s Void of Light Stout, plus natural peanut butter flavors. Really odd, with a strong peanut note hit on the nose, though it makes much less of an impact on the palate. Coffee grounds, gunpowder, and peppery cloves all give the ultra-black beer a massive punch, and despite a lack of any sweetness and a surprising level of acidity, it never comes across as overwhelming. 7.9% abv. B

Omnipollo Daidalos – From New Haven, CT: “Double almond, double chocolate, double coffee Imperial stout.” This is an ultra-rich, rather syrupy experience that pours molten coffee and chocolate syrup into a swirl of crushed almonds, giving the whole thing a sort of Ferrero Rocher experience, with a mocha served on the side. There’s a decent level of carbonation here, which surprises, as does a fair amount of bitterness lingering on the finish. Fun stuff. 12% abv. A-

Torch & Crown Time Is Not a Consideration – From New York City, this stout is brewed with strawberries, cacao nibs, gingersnaps, molasses, and lactose. I didn’t like this much, the fruit component significantly overwhelming the chocolate and coffee notes that linger underneath. Rather sour up top, the gingersnap notes seem to be the outlier here, with a pungent rush of fresh ginger — like a ginger beer — that never complements the other ingredients and which refuses to fade into the background. 11% abv. C

Kings County Brewers Collective Symphony of Bones – An imperial milk stout from Kings County, NY, it’s made with coffee, cinnamon, coconut, and milk sugar. A super-sweet sugar bomb, the coconut and coffee starts off the experience, with cinnamon working its way into focus in short order. The depth of flavor is immense, and Symphony of Bones threatens to suck you into its densely syrupy and rich experience and never let go. Ultimately, this is a beer that is delightful in small quantities, but it becomes a bit much after half a pint. That’s not a slight, mind you: At 14 percent alcohol, it’s a brew that’s designed for smaller portions, so bring a friend along to split the can with. 14% abv. A-

Hubbard’s Cave Cinnamon Iced Mocha – At just 6% abv, this Miles, IL-brewed stout (with cinnamon, chocolate, coffee, lactose, and vanilla beans) is the baby of the group, yet it still packs plenty of flavor. The coffee ground notes are dense with this one, with a mild dusting of cinnamon that doesn’t always play nice with the dense and bitter mocha character. Could stand a bit more sweetness. 6% abv. B

Decadent Ales Marble Cheesecake – This Mamaroneck, NY-based brew is a local affair, a collaboration with DeCicco’s Beer and Half Time itself. Barely carbonated, it’s a thick, coffee-scented monster laden with chocolate and a hint of baking spice. It doesn’t completely come across like a marble cheesecake, but I suppose it’s close enough — though again the coffee element tends to dominate here. Fortunately, that’s a good thing for this well-balanced stout, which hints at coconut and meringue on the lasting finish. Out on a high note! 12.5% abv. A-