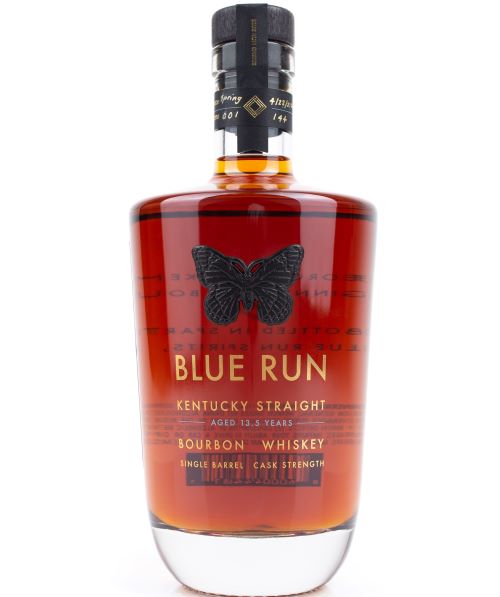 The unveiling of Blue Run 13.5-Year-Old Single Barrel Cask Strength Bourbon comes on the heels of Blue Run’s inaugural release in October of 2020. Blue Run 13-Year-Old Bourbon received exceptional reviews and sold out quickly. With Jim Rutledge as the company’s Liquid Advisor, this new batch of Blue Run will delight Bourbon drinkers around the country. Rutledge is a 50+ year whiskey industry veteran and a managing partner of J.W. Rutledge Distillery.

Each of the ten barrels comes from the same mash bill, same yeast, same still and same warehouse, but how the liquid reacted to the wood and its position in the warehouse can delicately change the characteristics of the whiskey.

Blue Run 13.5-Year-Old Single Barrel Cask Strength Bourbon has the brand’s characteristic smooth and mellow flavor; a long, sweet and dry finish; little to no burn on the back end – even at cask strength – and a long tail.

Between 104 to 150 bottles will be available from each barrel, with the proofs varying from 124 to 132. The secret to which barrel the Bourbon came from can be found on the hand-numbered label, which gives a hint at that whiskey’s particular characteristics and flavor profile:

Though each barrel has its own subtle flavor differences, consumers can expect the liquid in each bottle to have a deep glow, streaked with bronze highlights; an alluring aroma of molasses and brown sugar with a toasted, nutty frame that reveals itself around baking spices and cocoa; and a long, sweet and dry finish wrapped in dark cherry highlights.

“This limited-edition, high-proof release offers a uniquely customized experience based upon each whiskey fan’s palate, pairings and passions,” said Mike Montgomery, CEO of Blue Run Spirits. “While a bottle of Blue Run Bourbon will definitely stand out on your bar, it’s the flavor we are most proud of and glad to see experts like the judges at the San Francisco World Spirits Competition agree.”

Blue Run 13.5-Year-Old Single Barrel Cask Strength Bourbon will be found in May initially in Kentucky, California, Delaware, Georgia, Maryland, South Carolina, Tennessee, and Washington, DC, as well as online. But here’s the twist: No state will receive bottles from all ten barrels. Each will get up to nine, encouraging collectors to reach out to friends to help amass the entire collection. The product will also be available through Seelbachs.com, with bottles from a different barrel made available every few weeks (but again, with only nine available). Seelbach’s will also offer a very limited number of ten-bottle complete sets.

Blue Run’s latest release will stand out on store shelves due to the modern design by Devon McKinney, the creative mind behind some of the world’s most-sought-after sneakers. The brand’s signature butterfly medallion, a nod to the Commonwealth of Kentucky butterfly the Viceroy, will be matte black on the Blue Run 13.5-Year-Old Single Barrel Cask Strength Bourbon bottle. This new offering will come housed in a striking, handmade black lacquered display box made of sustainable birch and imprinted with gold leaf.

Blue Run Bourbon will be available at $229.99 SRP. The company’s next release, a 14-Year-Old Small Batch Bourbon that also won Best in Class and a Double Gold Medal at the San Francisco World Spirits Competition, will be launched this summer, followed by a Gold Medal-winning Rye Whiskey in late summer.

Blue Run Spirits is a new kind of spirits company, creating a unique luxury proposition by tapping into the deep heritage and craft that makes a truly great whiskey, then elevating it through a modern design and marketing lens to reach a younger, broader and more diverse whiskey drinker.  The company’s founders include a Nike designer, the first director-level employee at Facebook, a hospitality executive, a political advisor, and a philanthropist – all huge whiskey fans and individuals who acutely understand how to build demand and buzz for a contemporary consumer product. They are backed by a team of advisors including Nike marketing experts; the Campari communications veteran behind the US launch of Espolòn Tequila and the Aperol Spritz; a former vice president of innovation from Brown-Forman; a former spirits distributor; and others with deep industry experience. The Blue Run name is a nod to one of our founder’s upbringing in Georgetown, KY, where Bourbon began in the Bluegrass State.

More posts from author
Wednesday, 08 September 2021 Why Don’t CBD Drinks Work for Everyone?
Monday, 02 August 2021 Italian Eateries in Brisbane That You Need to Know About
Monday, 12 July 2021 5 Most Exclusive Wines in the World