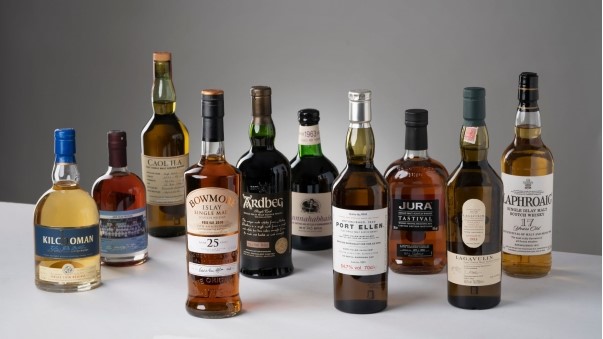 When it comes to whisky, few celebrations are as eagerly anticipated as Islay’s festival of music and malt – Fèis Ìle. Established almost 30 years ago, the festival draws visitors from across the globe to the thriving shores of the island each year to experience its community, culture, and its world-renowned whisky.

Now, the most extensive and complete collection of whiskies produced by the island’s legendary distilleries to commemorate the festival are being sold by secondary market leaders, Whisky Auctioneer with a proportion of the proceeds from the sale being donated to Islay-based charities and projects to support the local community.

From Friday (14 May) until Monday 24 May, over 240 limited-edition Fèis Ìle expressions from distilleries including Port Ellen, Laphroaig, Bruichladdich and Ardbeg will go under the hammer. The sale will celebrate the history of this iconic whisky region, the world famous festival and the incredible bottlings it has inspired over the years.

The treasure trove of bottles are part of Pat’s Whisky Collection – the largest private collection of whisky ever to come to auction. Known only to the world mysteriously as ‘Pat’, he decided to part with his 9,000 bottle library last year through a series of auctions with a mission to share his passion for whisky with the world by passing his bottles on to new owners.

Whiskies in the Islay Festival Auction include:

The 1982 single cask Port Ellen – arguably one of the rarest Port Ellen’s around (only 220 bottles in existence), this is the only Fèis Ìle release from the closed distillery. Bowmore 25 Year Old 25th Anniversary – bottled to celebrate the 25th anniversary of the annual Fèis Ìle festivities on Islay, Bowmore released a mere 100 of this limited edition signed 25 year old in 2010. Bruichladdich 1994 Valinch ‘Festival Valinch’  – bottled for the Fèis Ìle  2008, this is one of only 20 bottles. Early Fèis Ìle releases from Bunnahabhain and Ardbeg including their very sought-after 1960s and 1970s vintage single casks, respectively.

Joe Wilson, Head of Auction Content at Whisky Auctioneer, commented: “Fèis Ìle is an iconic celebration of whisky and Islay culture that draws people back to the island year after year. From Port Ellen to Bowmore and Bruichladdich to Ardbeg, this collection of Fèis Ìle bottlings is without a doubt the largest and most complete that we have ever encountered. The auction presents the rare opportunity for collectors and whisky drinkers to acquire some incredibly scarce malts that have been produced to celebrate the history of this iconic whisky region.”

Examples from each of Islay’s eight single-malt producing distilleries will feature in the sale, including complete collections of every single limited edition festival bottling from legendary distilleries such as Bowmore, Laphroaig and Lagavulin. A percentage of the proceeds raised during the auction will be donated to Islay-based charities and projects that support the Island community.

The sale will also feature bottles that have been donated to the Fèis Ìle Committee by distilleries in order to raise charitable funds for the island through their Islay Wave Project, which will focus on ways to support culture, artists and youth. Included in the charity lots will be the oldest and rarest release direct from the iconic Islay distillery, Port Ellen. The Port Ellen 40 Year Old ‘9 Rogue Casks’ is the second release in the ‘Untold Stories’ series, which explores the intriguing history of the Islay distillery ahead of its reopening after closure almost three decades ago.

Florence Grey, Chairperson at the Fèis Ìle Committee added: “Fèis Ìle was delighted to be given the bottles in this charity auction from Diageo, plus a signed bottle from the legendary Islay whisky maker Jim McEwan. All the proceeds raised from these bottles will benefit our island community as the funds will kickstart our Islay Wave Project – an ongoing project that will begin after this year’s virtual festival. Focusing on ways to support our island’s culture, artists and youth, The Islay Wave Project concentrates on everything we celebrate throughout Fèis Ìle. We are very grateful to Whisky Auctioneer for their support in bringing these bottles to auction.”

To register for the auction, visit www.whiskyauctioneer.com

Whisky Auctioneer will produce an exclusive ‘Ultimate Guide’ for collectors and enthusiasts about the Fèis Ìle bottlings, and host a live event with faces from the whisky industry. Inspired by the traditional format of the Fèis Ìle festival, each distillery will have a dedicated day during the auction across Whisky Auctioneer’s social media accounts and newsletter features.

The Fèis Ìle festival is a week-long celebration of music, malt and culture on Islay held annually. The festival originally evolved from the want to revive the Gaelic language and culture on the island.

Usually only available for visitors to the island during the festival, enthusiasts are regularly seen camping out in legendary distillery queues to get their hands on these special limited-run single malts.

This year’s virtual Fèis Ìle festival will run from Thursday 27 May to Sunday 6 June with an interactive programme of events.

For more information on Fèis Ìle and the 2021 virtual festival, visit www.feisile.co.uk

Whisky Auctioneer endeavours to make the market more accessible for buyers and sellers of any background and geography. Its monthly global auctions feature the most comprehensive selection of old, rare and collectible whiskies and spirits available online. Whisky Auctioneer is passionate about connecting these bottles with those who share in their passion and actively support their customers in their aims, whether that be consuming, collecting or investing.

In February 2021, the Perth-based online auction house made history during the iconic sale of The Perfect Collection when a bottle of The Macallan 1926 Fine and Rare 60 Year Old sold for a hammer price of £1m, the first time a single bottle of whisky has sold at an online only auction for one million pounds.

Whisky Auctioneer became the first online auction house to sell a million-pound bottle and outperformed the nearest traditional auction house by 200% in value from spirits sales in 2020, showcasing the move that whisky collectors, investors and drinkers have already made online and firmly establishing their leading position within the modern secondary whisky market.

The business currently sees over 100,000 bids per month and has conducted deliveries to 74 countries across the globe. It also opened its first European base in Germany last year.

The business’ Founder, Iain McClune, was listed as ‘One to Watch’ in The Telegraph’s Most Ambitious Business Leaders 2020 programme.