Beer - The Next Alternative Fuel? 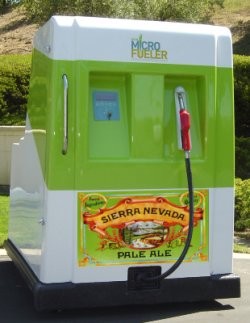 First we've heard of water and chocolates turned into automotive fuel. Now its beer. Yep, you're not hearing or seeing things. Beer, that sweet nectar of the gods, is now being considered as a potent candidate as an alternative vehicle fuel. I can actually start imagining myself pouring my dad's favorite beer into my car whenever I need to go out with my friends and he won't give me some cash for fuel!

Does this mean that you can now buy beer and use them as cheap fuel? I don't think so. The technology is still limited and it is still being studied. Also, the engines used by most vehicles is still geared towards petroleum, so further studies must be undertaken before beer can be used as alternate fuel.

However, beer fuel is now being used a source for alternative energy. In Europe, beer waste have become such a problem, considering that there are 15 breweries per square meter. The leftover grains coming from the beer making process is what most people would call as beer waste. Back then, these grains were sold to farmers for their livestock and can also be used as fertilizer. However, because of the dwindling business of cattle breeding and strict EU laws about fertilizer materials, the leftover grains accumulate inside breweries.

However, these beer wastes is now being looked at as a valuable commodity, since a joint study by researchers in Poland and Germany have demonstrated that the beer grains can be successfully used as alternate fuel. A man named Wolfgang Bengel, Technical Director of German biomass company BMP Biomasse Projekt. He saw a potential business opportunity with the leftover grains coming from the breweries in Germany and was encouraged to try out the experiment after hearing that rice and sugar cane residues have been used as sources of alternate energy in China and Thailand. Once treated with atmospheric fluidized bed combustion systems inside a broiler, the beer wastes does produce cheap electricity!

He did try it out in Asia and Bengel succeeded in this endeavor. Beer making is an energy intensive activity. The process of boiling the grains with hot water and steam, then cooling down the brew with electric energy uses a lot of power. So if you recovered more than 50 % of your own energy costs, then that's a big help for Mother Nature!